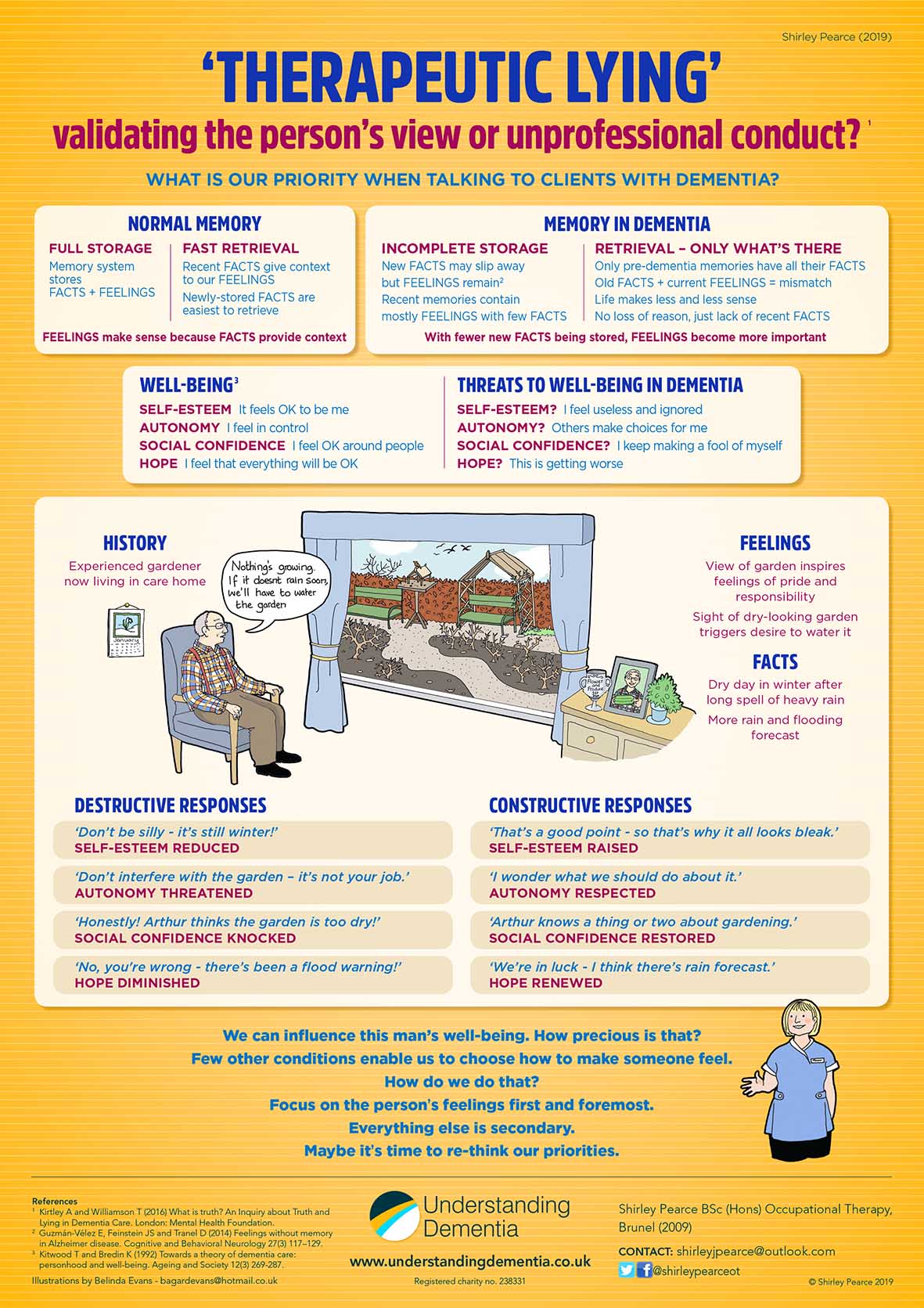 ‘… the truth, the whole truth and nothing but the truth.’ That’s what I promised to tell when I appeared at the Old Bailey, after witnessing a theft. But is it always appropriate in dementia care? Even in everyday life it’s not as clear-cut as we might think.

Some say that even if you are caring for someone living with dementia, you must always be truthful, no matter what. But people with dementia, whose memory does not keep a reliable record of facts, can appear to overreact. If you confront them with a stark truth that they had been temporarily and blissfully unaware of, they may experience deep shock or intense grief. So in care facilities where strict truth at all times is policy, the Incident Book is always to hand, with the Medication Trolley on standby.

Some organisations have a four-step protocol: first tell the truth; if that causes distress you try other tactics, like validating their feelings and substituting a need (e.g. if they call for their deceased husband, perhaps they’re lonely, so try taking them to the communal lounge), if that doesn’t work, try distracting them, and if none of these work, you are then permitted to use a carefully selected lie that fits in with the person’s biography. In some protocols that has to be agreed beforehand and included in their care plan.

This must lead to rather stilted conversations in dementia care, if you have to go through each option and then remember exactly what you are permitted to say, and under what circumstances.

Having spoken on this topic at the RCOT Conference 2016, I attended the UK Dementia Congress in 2019 with this poster. After a plenary debate on ‘environmental lies’ (a slightly different issue involving fake bus stops, which must be confusing for anyone struggling to make sense of their surroundings) the discussion continued around my poster, and later on over dinner.

Having been brought up to obey the Ten Commandments, I quite surprised myself with the voracity of my argument. I stated with absolute confidence that in dementia care, strict honesty is NOT is always the best policy.

Let’s unpick this a little. The Ninth Commandment says: ‘Thou shalt not bear false witness against thy neighbour’. Of course I wouldn’t condone that – or anything like it. What I mean about ‘lying’ to clients is more akin to chatting about the Tooth Fairy to next door’s seven-year-old, or thanking a favourite aunt for ‘the lovely present’ we didn’t like. It’s a matter of considering the person’s feelings before we speak, which is simply good manners.

The idea for my poster began as a reflection on a conversation I’d had with my client Arthur*.

One January day, Arthur looked out of the window, saw that nothing was growing and said to me: ‘It looks awfully dry out there – if it doesn’t rain soon, we’ll need to water the garden.’

This seemed a strange comment when we’d had heavy rain every day for the past week and it had only stopped raining the previous day. But since then the path had dried out. However, there was no grass or snowdrops visible from Arthur’s room, his view of the garden was all looking rather bleak.

If I highlighted his mistake and reminded him that it was still winter – he would feel stupid. If I told him the garden wasn’t his job to worry about, he might feel frustrated. When I visited him, he would often show me the patch of grass near his window and explain with great pride how it extended ‘right down to the lake at the back’. The house he’d left behind had extensive gardens, and there probably was such a lake. But at the assisted living complex where he now lived, there wasn’t even a pond. If I called out: ‘Honestly! Arthur thinks the garden is too dry!’ that might have amused the staff, but it would have embarrassed Arthur. And if I said ‘No, you’re wrong – there’s been a flood warning!’ he might have been alarmed. He used to live by the river, where flooding was always a worry. Any of these comments would pose a direct threat to his sense of well-being, that most rare and precious commodity in dementia.

Well-being
For all of us, four elements combine to make up the sense that life is worth living. We don’t need to be on cloud nine all the time, but we do need to feel reasonably OK. Felling OK in our own skin (self-esteem), OK with the choices we have (agency and autonomy), OK around other people (social confidence) and OK about the future (hope). We can apply these to my conversation with Arthur.

Telling him off would threaten his sense of agency and autonomy.

Pointing out his mistake in front of other people would destroy his social confidence.

Warning him about possible flooding would replace his sense of hope with one of impending doom.

Arthur’s memory system no longer stored that constant stream of factual information that normally provide the context for our feelings. Storage of facts was now very patchy and becoming ever more so, although his feelings were being stored as efficiently as ever.

We therefore need to understand that when someone’s memory is no longer storing facts reliably, facts may not be the be-all and end-all. Instead, we can learn to communicate on a ‘feelings’ level.

We already know how to do it in everyday life, so let’s take this skill, and those simple good manners, with us into our caring roles.

To learn more about using this counter-intuitive approach in dementia care, see https://understandingdementia.co.uk/

Dementia Friendliness – what is it exactly? Awkward questions…

Behaviour in dementia – an alternative view

This website uses cookies to improve your experience while you navigate through the website. Out of these cookies, the cookies that are categorized as necessary are stored on your browser as they are essential for the working of basic functionalities of the website. We also use third-party cookies that help us analyze and understand how you use this website. These cookies will be stored in your browser only with your consent. You also have the option to opt-out of these cookies. But opting out of some of these cookies may have an effect on your browsing experience.
Necessary Always Enabled
Necessary cookies are absolutely essential for the website to function properly. This category only includes cookies that ensures basic functionalities and security features of the website. These cookies do not store any personal information.
Non-necessary
Any cookies that may not be particularly necessary for the website to function and is used specifically to collect user personal data via analytics, ads, other embedded contents are termed as non-necessary cookies. It is mandatory to procure user consent prior to running these cookies on your website.
SAVE & ACCEPT